Our mission is to provide products and services that will enable lawn bowlers of all skill levels to achieve their peak performance.

Our Goals are to use our passion and expertise to match and exceed our customers’ expectations and inspire long-term loyalty.

Contact Esther on 021 312888 or email This email address is being protected from spambots. You need JavaScript enabled to view it.

Two-time champions of the Ryman Healthcare Auckland Open 2-4-2 Mixed Pairs Scott Harrison and Esther Eu were back to their best, taking out the title for the second successive year. 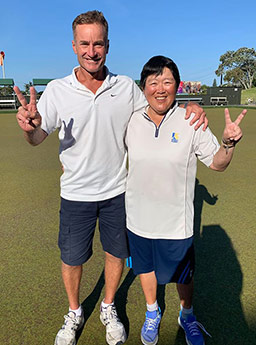 The composite Auckland pairing of Scott Harrison and Esther Eu capped off another remarkable win over the weekend, taking out the Ryman Healthcare Open 2-4-2 Mixed Pairs for the second successive year.

The 2020 event, which attracted 88 combinations from all parts of Auckland and further afield, was held over three days at Howick, Royal Oak, Glen Eden, Papatoetoe Hunters Cnr, Blockhouse Bay and Te Atatu Peninsula – with all finals action commencing at Howick.

With the weather playing its part, two days of qualifying set apart the section winners and next best qualifiers, comprising a post-section draw of 32 teams.

From there, 32 qualifiers are drawn in to eight sections of four, with a round robin of three games playing out to find the top eight.

The semi-finals saw Harrison and Eu overcome the composite duo of Hall and Bolscher, 17-11, while the Royal Oak pairing of Tawharu and Gavin proved too strong for Bloomfield and Bell, 24-7.

In pleasant, though breezy conditions on the Howick green, the final saw the reigning champion combination of Harrison and Eu race out to a 12-2 lead in a sixteen-end format, comfortably controlling play and scoring steadily throughout.

A determined comeback from the Royal Oak hopefuls on the final four ends saw the scores draw closer, though a solitary shot on the penultimate end for Harrison and Eu all but sealed the match – with Gavin and Tawharu left to chase four to force an extra end. 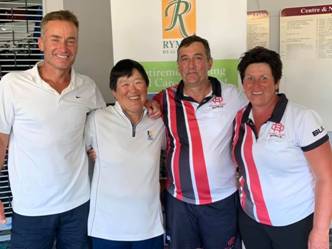 With two last gasp efforts from Gavin failing to execute a kill, Harrison and Eu secured their second successive win of the event, 13-10 – proving a star combination and backing up last year’s efforts in style.

The cart is empty